Disclaimer: This post series is going to deal with very sensitive topics including suicide, abuse on many levels, and hard truths. If you or someone you know is somehow included in this blog series, please do not be offended by what I may write.

It is my life, and my perspective.

I want everyone to know where I come from and what I have overcome, and I believe that everyone is entitled to their own personal truths. I know that many people deal with hard things in their life, and you may never know because it is so well hidden, especially when it appears fine on the surface. Most people would never guess that I’ve had the life that I have based on who I am at this point, but I wasn’t always the person you see today. I hope my story has an impact on those that need it, and to know that you aren’t alone.

Things seemed relatively fine for awhile in this new life. It was strange and completely different. My mom and I began to attend a church that was near our trailer park and we slowly started to know many people in the village. But as soon as we made friends and began to live a generally happy and settled life, we suddenly had to move yet again. We had only lived here for one year. We moved to the next village over, and the same thing happened every single time. We moved every year, or less than a year. As soon as it seemed we were getting comfortable and gaining friends, D would pick us up and move to another location.

In the second place that we lived, there was a family across the street that we became friends with. I always would go over and play with their kids every evening and every weekend. They were great friends, although I can’t remember their names at all at this point.

I remember one particular night when we were visiting them. All the kids were watching Disney’s Robin Hood in the living room, laying on the mustard colour shag carpet and eating raw, cold hot dogs as a snack (what a strange and disgusting memory), when suddenly there was a lot of laughing coming from the adults in the dining room. Then came a loud yell from my mom, and I was incredibly scared. It didn’t sound right at all, and sure enough it wasn’t. D was playing with a lighter and keeping the flame lit while getting closer and closer to my mom’s hair. Somehow under the guise of “having fun”, everyone else at the table was laughing while my mom tried to get him to stop. He eventually ended up setting her hair on fire, which is when she yelled. Thankfully she didn’t get burned on her skin, and she did manage to put out the flame in her hair quickly, but that doesn’t change the fact that D was still laughing. He enjoyed torture in these ways, and didn’t see anything wrong with it. Mom took me home immediately and the house was an anger filled place for quite awhile afterwards.

Soon after, they were having more money problems. I cannot remember where exactly D was working at the time, but mom’s disability cheque from the government was not going very far. I was 9 at this point, and I had been saving all the money from every birthday and holiday for quite a few years. I had about $300 saved up and the two of them sat me down and asked me if I would be willing to give up all my savings to help them out of whatever problem was going on. Of course I said yes, because how could I say no? I wanted to help out as best as I could.

Unfortunately, that was only the first time that my money was “borrowed”. Much of the money that was ever sent to me as a gift from family on any holiday was saved by me, only to be used to pay bills at some point. I always said I didn’t mind because I wanted to help out my family, but of course I was always sad. It was quite a fortune to a young child, and I loved saving my money, planning what I could buy some day. Mom always tried to pay me back little by little, but eventually they used everything I had saved again and again, because money problems don’t usually stop once they begin. At some point, Mom cashed in part of her life insurance early, and paid me back some of what they had borrowed, and then started giving me an allowance every week for the chores I did. I would always spend most of my allowance as soon as I got it, afraid that I wouldn’t be able to keep it anymore. So my $5 got poured into an Archie comic and junk food. Every week, I would buy the same things from the local drugstore. Archie comic, candy, or chips and a pop.

It was around this time that I started really gaining weight. Since we didn’t have much money, mom always made me eat as much as possible when we had food. She wanted to make sure to keep me well fed in case we couldn’t afford much more on another shopping trip. In addition to this, cheaper food tends to be more unhealthy, and when cheap is all you can afford, that’s just what you end up eating. We always had plenty of cheap junk food in the house, ready to munch on. We had lots of processed and packaged products ready to go for dinners as well. This is really when my emotional abuse started. D constantly called me names. Every name you could generally think of to throw at a fat kid, I guarantee he said it all. There was nothing encouraging about this man. He beat me down at every turn. Every day without fail, he would yell at me, call me names, and tell me how pathetic I was. Naturally, as I can see clearly now, these reasons drove me to something, and that something was food. It made me happy to feel full and it gave me something to do and keep busy, ignoring the world around me.

It came time to move yet again. This move however, began with some excitement. We left the village and were now going to be out on a farm. It was a beautiful piece of land with a big valley on one side of the house, leading down to a creek. There were plenty of trees and wilderness to explore. It was a young boy’s dream world. I could explore for hours and hours on end. It was the kind of place that stimulated imagination. I cannot imagine my life without this wonderful place. It gave me a refuge from the emotional abuse that was happening to and around me. I could just get outside and wander through my own personal forest, pretending to be a famous adventurer, exploring new worlds. 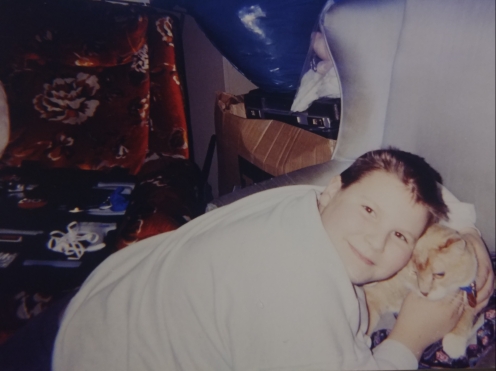 Shortly before this, the third move, I was removed from school. There were a few reasons that it happened. The main reason that I was always told is because the teacher wasn’t challenging me enough, and I wasn’t learning anything in school because I was ahead of all the other kids. This is definitely true, and I remember that very clearly, but I have always believed that another reason was because it kept me from gaining friends. Not only that, but my mom and I could not attend church anymore now that we lived outside of town, because D refused to let mom “waste gas” getting into town for more than groceries, and the store happened to be closed on Sundays. This move away from the village also made it easier for D to cheat on my mom. The wife of the family that lived across the street from us became (I believe) his first affair.

He would take me into town so that I could play with her kids, my friends. He always told mom thats what he was doing so he could seem like he was doing something nice, but really, it was all just a ruse to sleep with the wife while the kids and I were playing in the basement or in the backyard. It was sadly the first of many times and multiple women. As I remember these events now, it’s shocking to me that I had no idea what was going on upstairs. But when you are an oblivious child, there’s plenty of things that going on around you that are well beyond your grasp.

Since I was no longer attending school, mom had begun homeschooling me, and now D had opened up a mechanics shop at the nearest truck stop. We lived very close to the truck stop and he always insisted that helping him in the shop was more important than school. So I had to quickly do my schoolwork in the mornings and spend the rest of the day working in the shop, sweeping, mowing the yard, stocking shelves, grabbing tools for him while he worked, etc.

This was where the physical abuse began.